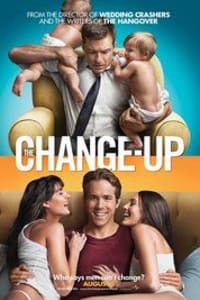 The Change-Up (Also Known As: El cambiazo) is a Comedy, Fantasy film directed by David Dobkin and written by Scott Moore. It was released on 5 August 2011 (USA). It stars Ryan Reynolds, Olivia Wilde. The film’s content : Dave is a married man with three kids and a loving wife, and Mitch is a single man who is at the prime of his sexual life… What awaits ahead? Enjoy the film and discover by yourself.