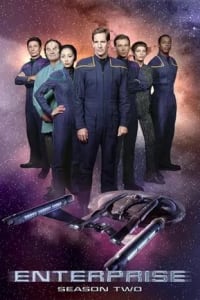 The second season saw the series continue a concentration on stand-alone episodes as seen in the debut season, but the decision was made to start an ongoing story-arc to run into the third season with the second season finale episode “The Expanse”. The second season also saw the return of executive producer Rick Berman to writing duties after he had been working on the film Star Trek: Nemesis.