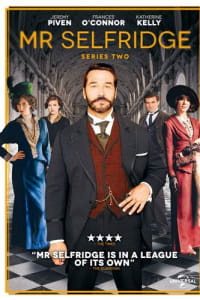 Mr Selfridge is a British-American period television drama series about Harry Gordon Selfridge and his department store in London, set in the 1910s. Season 3 opens in 1919, a year after the war ended and after losing his wife, Harry and his children try to focus on the wedding of his daughter as the light on the horizon. Later, Harry finds himself in hot water when he agrees to help Nancy Webb but has issues with how to go about helping.

I Melt with You

The Pirates! Band of Misfits