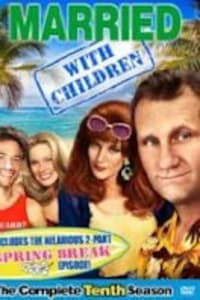 Married with Children is an American sitcom featured a dysfunctional family living in a fictional Chicago suburb. The nineth season opens with Al and Jefferson deciding to cash in on 1970s nostalgia by selling shoes from that period; later Al having to renew his driver’s license and is upset to learn that Bud will be his Examiner.