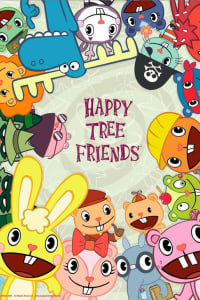 Happy Tree Friends (Commonly abbreviated to HTF) is a Flash cartoon series by Mondo Mini Shows, created by Kenn Navarro, Aubrey Ankrum, Rhode Montijo, and Warren Graff. Since its debut, the show has become a popular internet phenomenon and has won a cult following. As is indicated on the official site, the show is “not recommended for small children”.